If you’ve ever wanted a surefire way to keep track of how you’ve changed over time, try leaving the place you grew up in and live 2000 miles away for five or ten years before returning.   Since you don’t have an opportunity to remold your perceptions of the places and people there through newer memories, you essentially will be able to explore an untouched archaeological site which has your entire thought life, dreams, and memories preserved from a time past.

Having recently gotten settled into post-college work life in Philadelphia, I realized that with 2018 marking my 10-year high school grad anniversary, it was a great excuse to see what I might unearth at my personal archaeological site:  Saskatchewan, Canada.  Having moved to Pennsylvania immediately after graduation, and only having returned for a few brief stints, I had friends I hadn’t seen in nearly a decade.  I couldn’t help but wonder if, through the million meals and Tim Hortons coffee dates I had planned (who could pass up on Roll Up the Rim?), I might find some buried Canadian treasures to import to the States.

It was fun rediscovering some of the little things I’d forgotten – the sensation of frozen nostrils; how everyone actually knows where north is, not restrooms; how everyone will turn around and look if a firetruck happens to go by, cause that’s actually a big deal.

But in some ways it was also a bit alarming.  In many ways I felt less like a former resident and more like an inquisitive tourist.  Sure, lots had changed there in 6 years, but I felt like the biggest changes were in me.  It felt as though my brain had literally shifted. 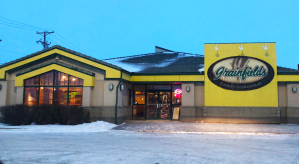 For example, I found myself driving around Saskatoon wondering how I ever used to get around the city; until this trip it had never occurred to me that 8th street, 22nd street and 71st street were all part of a city grid system which increased northwards.  It had never occurred to me that Grainfields Restaurant was given its name to represent a significant economic and cultural symbol of Saskatchewan; to me it had just been my sister’s favorite restaurant.  It seems that when we were younger, we tended to see things for their shapes, colors and associated memories. Now, I found myself mostly thinking about marketing, city planning, and Yelp reviews.

I found myself on my phone constantly (considerably more, I might note, than most of my friends there…it was nice seeing not all millennial are addicted to LCD), exploring my homeland with virtual eyes for the first time.  It got me thinking that while Wikipedia articles and Yelp reviews are certainly wonderful for increasing correct factual information, we also are much more at risk to oversimplify complex things and mistrust our own intuition.  What an adult thought.

I visited my hometown, and things felt a little more familiar there.  However, with my grown-up eyes, I did wonder why I never thought it odd that there are two Mennonite churches directly across the street from each other.  In a town of one thousand, I wondered what possible theological disagreement could be so extreme as to warrant this?  I mean, in the six-million-person city I live in now, there are maybe seven Mennonite churches, and I don’t think any of them even share the same postal code.  But hey, I’m not judging.  I think that we humans all have different ways of drawing borders in our lives.  The world gets too big otherwise.  It’s the criteria of those borders, and the vehemence with which we enforce them, that varies across humanity.

I found myself constantly humbled by the realization of how little I knew about the world growing up.  And how confident I was that I had it all figured out.  One of my friends I spoke to while there said “When I become an adult, I thought I would have firm opinions on everything”; we had to laugh at how well that had turned out for both of us.

Clearly, I had a number of various epiphanies that probably each deserve their own article.  However, I want to talk about one thing that stood out to me above the rest.  This thing was subtle at first, but as my stay went on, I began to realize that during the 18 years of my life spent here, I don’t think I’d ever consciously had the opportunity to appreciate this aspect of my homeland till just last week.

What was it exactly?  It was in the handcrafted “welcome” sign and candies that were put on the guest bed when I arrived at my friends’ house.  It was in the fact that I don’t recall anybody interrupting each other in conversation. How I didn’t hear a car horn for four days.  How most of the people I drove past in my hometown still gave me the two-fingered wave even though they had no idea who I was.  Seeing my friends owning businesses and nice houses, some settling down and having kids (one is in first grade already?! Come on);  in hearing the stories of friends and family who had quietly endured incredible struggles without feeling the need to advertise and commodify it.

It’s hard to put into a word, but it was a sort of kindness and unassuming humility – might I even say happiness? – that I found myself being touched by in a new way.  I’m not saying these sort of things don’t exist in the States; I think the reason these things stood out was because of their contrast to where I live and work – a somewhat cutthroat industry in an already aggressive city.  I think this trip helped remind me that there’s more out there.

I don’t want to oversimplify Saskatchewan and say that everyone’s happy or has perfect lives; I mean, almost everyone I met with talked about one major problem or another.  And there’s a tradeoff to this attitude: smaller, nicer cities tend to not have a population that can easily support ambitious artsy people – or even have a grid for what that sort of career might look like (one of my friends’ dads thought acting meant “chronically unemployed”.  Ouch.).

However, coming back to the States, I have a renewed appreciation for both the artistic opportunities I have here, and the chill, unassuming vibe I grew up in over there.  Is it possible to combine Saskatchewan kindness with Philadelphia ambition?  Can you be in a business that’s about selling yourself, but do it because you wan to help other people?  I’m not sure, but I’m gonna keep trying.

So next time I find myself fretting over where to get new headshots or being infuriated by that random unknown person who dared unfollow me on Twitter, I hope I’ll happen to glance at my wall, where an obnoxiously large Saskatchewan flag now hangs.  I hope it will yell into my brain – in a quiet, unassuming way, of course – that the world isn’t all blood, gore, and drama.  Keep it simple, take a day off, and keep your stick on the ice.  We may now be seeing the world as grown-ups, but I believe we can continue to learn from our childhoods.  For it’s in these gentle reminders that we might re-discover some of our greatest treasures.

Published by live it real

Actor/Writer/Musician. Born and raised small-town Saskatchewan Mennonite. Trying to stay on good terms with my inner child. View all posts by live it real